The eighth X-IFU Consortium meeting was hosted by the University of Geneva. It span from September 10th to 14th. As usual, the meeting consisted of splinter meetings and plenary sessions. Beside the XSAT splinter and some technical meetings on JAXA coolers and on the Detector Cooling System, one splinter meeting was devoted to the preparation of the Instrument Preliminary Requirement Review (IPRR) documentation. The X-IFU Consortium Board met twice to prepare the Instrument Consortia Consolidation documentation, and iterated on the critical technologies and designs to be demonstrated before adoption.

The plenary sessions lasted two full days, giving sufficient time to review the status of the Athena mission, the baseline configuration of the instrument, and the status of all X-IFU subsystems. The last morning session of the meeting focused on science and performance related topics, and was concluded by presentations on the way forward to the IPRR. Let me take this opportunity to thank again the University of Geneva, and more particularly Enrico Bozzo, for hosting so smoothly the whole meeting in the beautiful city of Geneva. The next Consortium meeting will be in Grenoble, hosted by CEA-SBT.

Big day at IRAP, the Cryostat is now fully integrated and cooling down. This high precision technology equipment will eventually reach temperatures very close to the absolute zero (less than 50 mK !). Hence IRAP will host the coolest spot of Toulouse. This is a great achievement for the Athena X-IFU team and soon the tests will start. 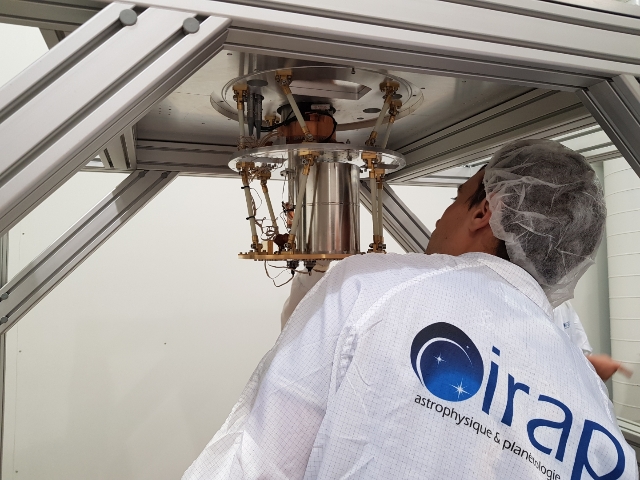 A view of the cryostat from inside 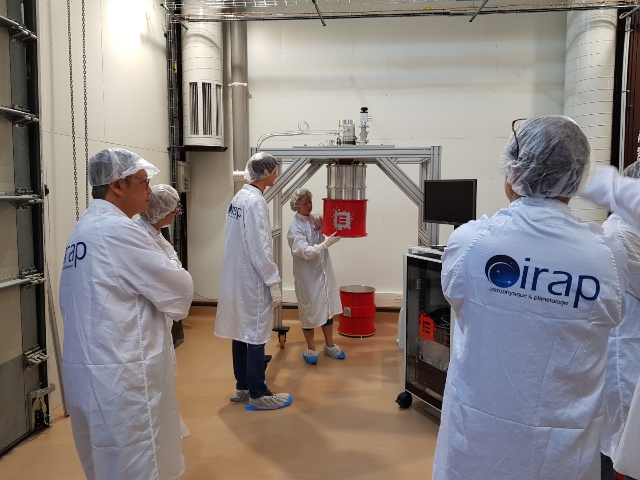 The overview X-IFU paper published in the proceedings of the SPIE 2018 in Austin (TX) is available from the ArXiv.

Thanks to Françoise Douchin, on behalf of the editorial team, I am pleased to announce the release of the July 2018 of the X-IFU Gazette.

Thanks to all the contributors to this new Gazette.

Enjoy the reading. Don’t hesitate to provide feedback to Françoise (Francoise.Douchin@cnes.fr) on the content of the X-IFU Gazette.

Here you will find the overview X-IFU presentation at the SPIE meeting in Austin, on June 13th, 2018.

The meeting will be held in the Faculty of Science of the University of Geneva, specifically the “École de Physique” building:

The plenary session will take place in the “Grand Auditoire” (hosting up to 250 people), and a few additional meeting rooms have been reserved for the splinter meetings (Salle Stueckelberg, Salle MaNEP, Blibliothèque du DPNC, salle du DPT). Information for the directions to the different rooms will be available on site.

Coffee breaks will be served on site. A large number of restaurant and fast food places are also available around.

The venue is conveniently located close to the city center, at a distance of about 20 minutes from the central station “Cornavin” with the tram (or roughly 30 minutes walking).

The international airport of Geneva is located quite close to the city and it is conveniently connected with trains and buses (it takes about 15-20 minutes with the bus from the central station to go to the airport, and about 10 minutes with the train).

It is recommended to book your hotel using any available internet website as soon as possible. Geneva gets very busy at any period of the year and the price of the hotels might increase significantly if other events are running in the city.

The usage of rented/personal cars in the city is discouraged. The number of parkings available around the meeting place are very limited and the cost could be not-negligible. Public transportation in Geneva is very convenient and effective. The Hotels will give you a free transportation card for each day of your stay, such that you do not have to pay for public transportation. Please remember to explicitly ask to your hotel at arrival.

Please note that free public transportation from the airport to Geneva city center are made available at the airport right before you exit from the baggage claim zone (there is a free ticket machine).

In preparation of the consortium formalization by ESA, an additional five X-IFU co-investigators were recently appointed : S. Bandler (US), E. Costantini (NS), L. Duband (FR), K. Sakai (JP) to which a German CoI will be soon added. Four scientists joined the X-IFU science advisory team : S. Ettori (IT), J. Kaastra (NL), P. Mazzotta (IT), A. Simionescu (NL) to strengthen the coverage of the hot universe science, which is driving key X-IFU performance parameters.

Thanks to Françoise Douchin, on behalf of the editorial team, I am pleased to announce the release of the April 2018 of the X-IFU Gazette.

Thanks to all the contributors to this new Gazette.

Enjoy the reading. Don’t hesitate to provide feedback to Françoise (Francoise.Douchin@cnes.fr) on the content of the X-IFU Gazette.

The 7th consortium meeting spread over a full week was held at the Astroparticle and Cosmology Laboratory (ApC) in Paris from March 19th to 24th. The organization of the whole week was led by Damien Prêle. ApC provides a major component of the X-IFU, namely the so-called warm front end electronics, the closest part of the readout chain to the cold electronics of the X-IFU. Those electronics are a key contributor to the instrument performance,  benefiting from the excellent skills of the ApC electronics group.

The meeting was attended by about 140 engineers and scientists from all across the world. 18 splinters were organized before and after the 1.5 day plenary sessions. The plenary sessions featured the usual presentations from the X-IFU Consortium and project leads and ESA.

CM7 will be remembered as the meeting in which a consolidated baseline of the X-IFU was presented by the CNES project team. This closed a very active period of activity of three months. The main changes is that the cryogenic chain now fulfills plainly the 30% margin policy on thermal budgets, even in the more dramatic case of a cooler failure. This was achieved, assuming that the outer vessel of the Dewar would be cooled at 200 K, a lower dissipation at the 2K stage and updating cooler performances. This is a milestone because a stable configuration for the instrument will enable us to hold the IPRR by the end of 2018. Optimization work will  still continue until June at least, as some promising options have been identified. The CNES team and all the consortium partners involved should be deeply thanked for this major achievement. A mass non-compliance of less than 30 kg remains, but is modest compared to the 30% system level margins of the 7 ton Athena spacecraft. The baseline configuration was reached while preserving the top level performance requirements of the X-IFU. This clearly shows that before considering de-scopes for the instrument, consolidated design work is required, and this takes time and efforts. Thanks to Thien Lam Trong, our CNES project manager, for getting there without asking me to descope the instrument.

Of the highlights of the meeting, the significant progresses made on the detector cooling system by the CEA-SBT and JAXA team was impressive as 50 mK is routinely achieved in different cooler configurations. The progresses in the TES development and the performance of the baseline readout for X-IFU should also be emphasized. SRON now measures on single pixels a spectral resolution close to 2.5 eV. Next step is obviously to check the performance when pixels are multiplexed. The improvements in the sensor (e.g. higher resistivity devices) helps reading them at high frequencies, when an AC loss phenomena was previously measured with less resistive devices. The need to define baseline parameters for the sensors is now becoming urgent. In parallel, the analysis of Time Domain Multiplexing as a back-up to FDM is progressing well, on track for getting a detailed report by June. Progresses in the definition of several subsystems should also be mentioned, taking advantage of iterations on specifications with the CNES project team.

The science talk by Edoardo Cucchetti on cluster science highlighted the unique capabilities of the X-IFU. The full bread of X-IFU Science Advisory Team activities were presented, before the introduction of the X-IFU instrument simulator (XIFUSIM), whose first release was announced. A report on the WFI technology status was also presented by Arne Rau. The meeting included a presentation by Paul Callanan on a potential Irish participation to the X-IFU, for which PRODEX funding was obtained. It is worth noting that a contribution from Czech Republic is now also being considered for X-IFU, under the leadership of Jiri Svoboda who attended the meeting.

Overall, CM7 was an extremely important meeting, marking a milestone in the project life, because we do have now a stable baseline. Everyone will keep working hard on the consolidation of the baseline.

The next Consortium meeting will be in Geneva from September 10th to 14th, hosted by the University of Geneva, also a key contributor to the X-IFU, through the filter wheel and a large participation to the X-IFU Instrument Science Center. Needless to say that it will be a great success if it brings the same momentum to the X-IFU Consortium as CM7 did.

X-IFU Consortium meeting #7 starts on March 19th and will last throughout the week. 140 registered participants are expected at ApC in Paris. Highlights of the meeting should be the presentation of the revised baseline configuration for the instrument, as well as recent progresses in technology.

[10 September 2020] Astronomers take actions to raise awareness on climate change
The Nature Astronomy journal has published, this Thursday, 10th of September, a series of articles written by astronomers about the...
[21 July 2020] Two postdoc positions to join the X-IFU team
Athena is the second large mission of the Cosmic Vision science program of the European Space Agency. Dedicated to the...
[20 July 2020] The X-IFU Gazette #15 has been released!
This 15th issue brings you the latest X-IFU information right before the summer break! We will start with an update...
[5 June 2020] Our commitments for World Environment Day
On World Environment Day, it is a perfect opportunity to share our efforts to reduce the environmental impact of the...
[28 May 2020] New Video: Discover the heart of the X-IFU
A brand-new video about the X-IFU (X-ray Integral Field Unit) is now available. You will discover the heart of the...
[14 May 2020] The X-IFU Gazette #14 has been released!
The 14th issue of the X-IFU Gazette has been released! As we move through the Covid-19 pandemic, I first hope...
[14 May 2020] Exclusive images of the next X-IFU video
The new X-IFU video about the heart of the instrument will be published in just a few weeks. As we...
[10 April 2020] The X-IFU Consortium meeting #11 goes virtual
This week, from 6th to 9th of April, the X-IU held its 11th Consortium meeting (CM11), fully virtually for the...